Things finally seem to be settling down again after Grace's birthday. Chris has finally gone back to work, Eve is back at school on Thursday and Grace starts university in a few weeks time. It feels like forever since I've had the house to myself.
The book Eve gave Grace for her birthday is brilliant, Super-Cute crochet by Nicki Trench.

There are 35 different patterns for cute animals and all of them have a witty introduction, highlighting their characters. We are told that Alphonso the alpaca owns an Internet business selling Alpaca wool and flies kites in his spare time. While Alan the lion plays the saxophone in a ska band.
Grace and I have already made a chick each. I made Rita, the pink chick, rather wide-eyed and innocent. Grace made Lancelot, a chick who commands great respect! 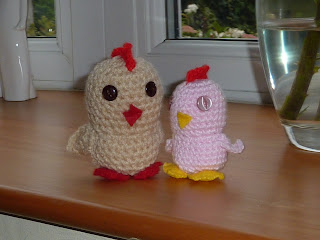 I have my eye on one of the fish brothers next. Grace has almost completed the pickle the dog pattern. She just has to sew him together (I think she's hoping I'm going to volunteer for this!!). She's so pleased with her creations that she has joined Ravelry so that she can show off her goodies. Her Ravelry name is Smiles-A-Lot.

There have been Formula 1 races the last two weekends so Eve's boyfriend cardi is coming on a treat. I hope to have it finished by the end of this week. Then I can concentrate on knitting for me - how wonderfully self-indulgent.
Posted by Janet at 14:42