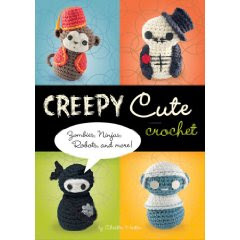 The Grim Reeper is rather cute, as are the Knight and the Ninja. Grace has gone off to Liverpool to buy some black wool - a pink vampire just has no credibility!

Well Eve was right about the Kidsilk Haze scarf - You'll regret it she said - and she was right. I have made hardly any progress on the scarf and it isn't enjoyable knitting it, despite the nice and easy pattern - I just hate that yarn so much. So - last night I decided to change tactics - I frogged the knitted scarf and now I'm crocheting one instead. It is so much easier to crochet with this yarn than to knit. It's just as impossible to undo if you've made a mistake, so plenty of care needed but the pace of the project has notched up considerably. I'm doing a shell trellis pattern which goes really quickly and looks nice and airy. I had crocheted more in an hour than I had managed to knit in a week. The future of Kidsilk Haze is clearly with the crochet hook - I may even get to like it!! 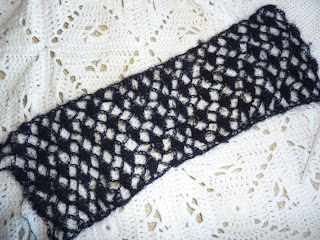 But maybe I should wait until the scarf is finished before I get carried away!!