And It's Over in the Blink of an Eye

The three weeks of the Tour de France just flew by.  I've spent the time, whilst watching the cycling, concentrating on my stash busting and I'm pleased to say that it's been an enjoyable three weeks.

In my previous blog post, I showed you the first six projects I had completed.  I'm pleased to say that I managed to complete another six projects by the end of the Tour.  That's one better that last year.

I blitzed the Schmancy Shawl that I had started knitting.  It blocked up beautifully.  For this project I was using up some frogged Rowan 4 ply.  You can see full details of this project on Ravelry, here. 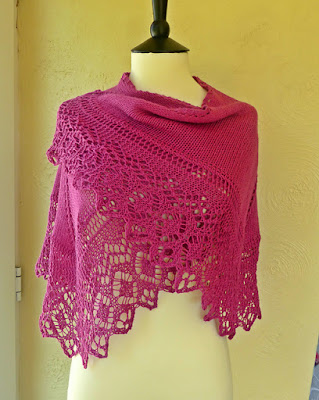 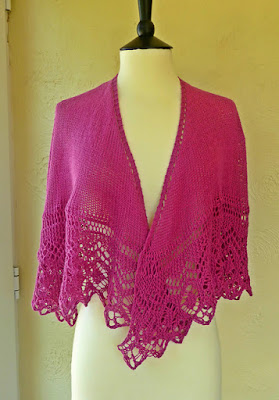 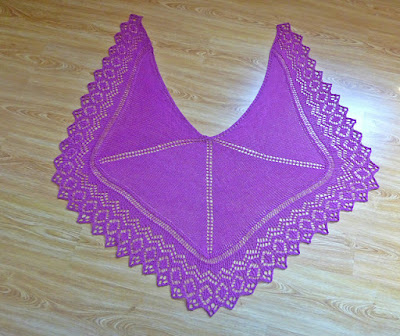 The edging blocked out beautifully and I love the drape of the shawl. 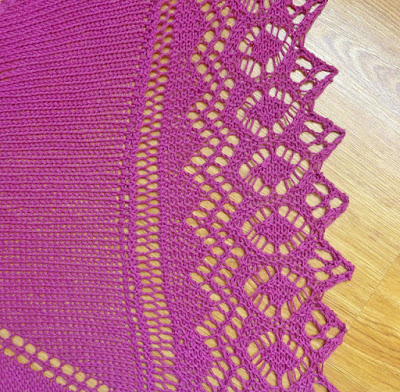 The next project completed was a crocheted basket.  I had two balls of rather rough cotton which I used doubled and it created the perfect fabric for the basket. 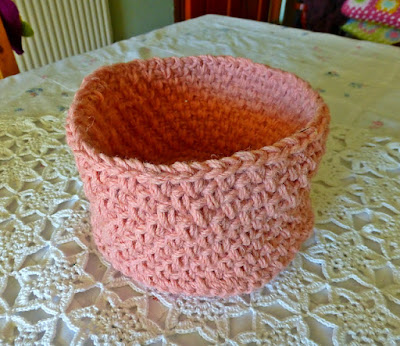 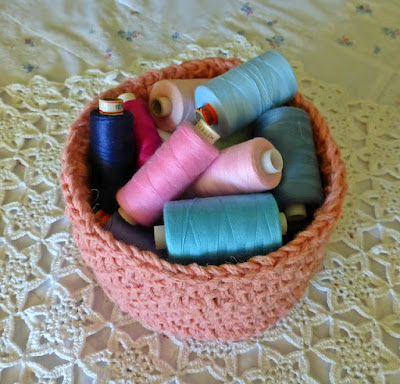 Next, some mittens.  I used some beige 4 ply for the cuff lining and the main body of each mitten was knitted using some unidentified yarn that I had picked up in the charity shop very cheaply.  These should be lovely and snug when it gets colder. 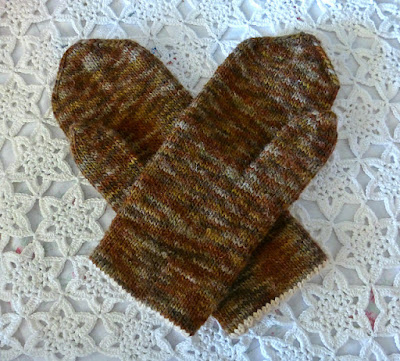 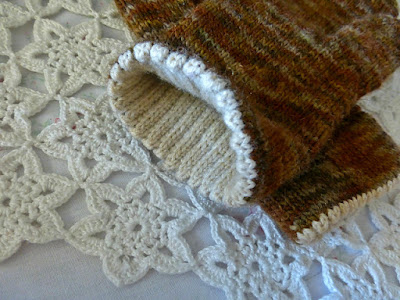 Some leftover angora yarn made a colourful and fluffy yarn bag. 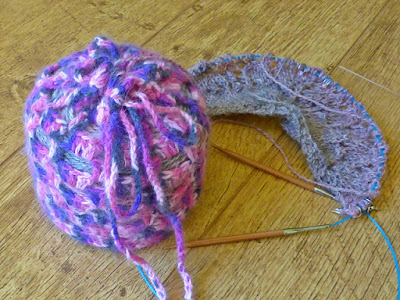 And some leftover lace weight wool & silk yarn became a mini shawl and a doily. 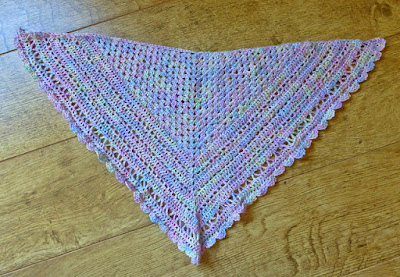 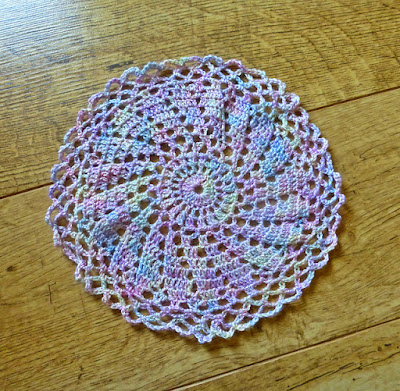 So all in all, I'd say that Chris Froome and I have had a very successful 2016 Tour de France. 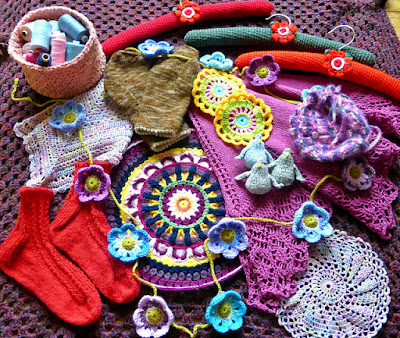 With all this successful stash busting, I'm joining in with Linda's Stash Buster Party once again.  I must admit, it has been a great incentive to me over the last few months and I can actually see the light at the end of the tunnel (or even the craft room).  Next month it will be six months since I had my stash weigh in and I'm planning on getting the scales out again to see how I am progressing.  At the moment I reckon I have busted over 6kg of stash, which is one third of my starting total.  I have a few works in progress that I'm hoping to get off the needles in the next few weeks and reduce the total even further.

In other news, we had a lovely weekend down in London visiting Eve.  We went down on Friday and came home yesterday.  The weather was hot and sticky but we manged to get out and about with Eve every day.  We had a great trip to Greenwich on Saturday - so much to see and great views across the river to Canary Wharf. 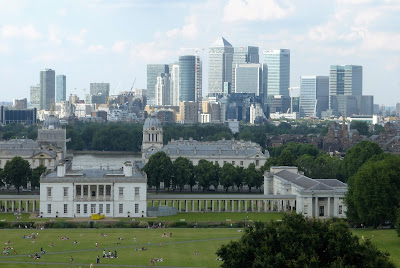 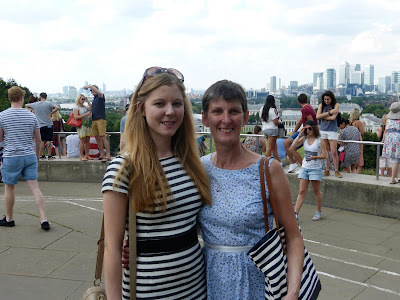 It was lovely to see Eve again and to be able to explore more of London.  There's still so much more we'd like to visit, so plenty more trips down to London  are definitely on the cards.

Well the Tour de France may be over, but we have the Olympics to look forward to very shortly.  I haven't decided if I'm going to do a themed knitting and crocheting challenge for this, but whatever I decide, I'll be glued to the television for the duration!

Here we are more than half way through the Tour de France and I haven't up dated you on what I'm doing!  How lax of me.

Last year, I joined in with the Tour de France group on Ravelry and did some stash-busting.  I managed to complete 11 items and used up 768g of very old stash.  This year, although I was tempted to just work on one major project for the three week duration of the Tour (the Yellow Jersey), I decided that my stash-busting mission is still very much ongoing, so I should repeat last year's endeavours, sprint for the line and go for the Points Jersey (the Green Jersey).

So far I have made three pigeons! 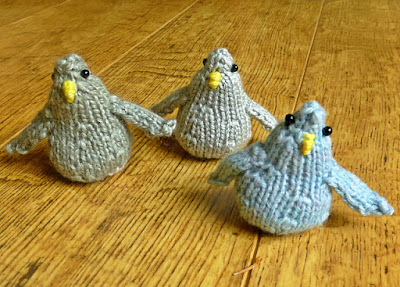 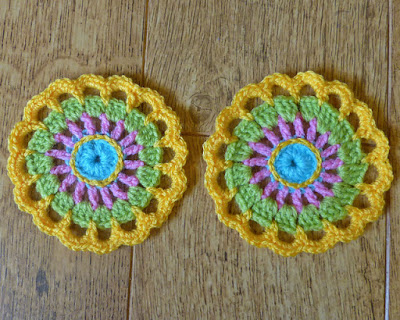 A pair of very red socks. 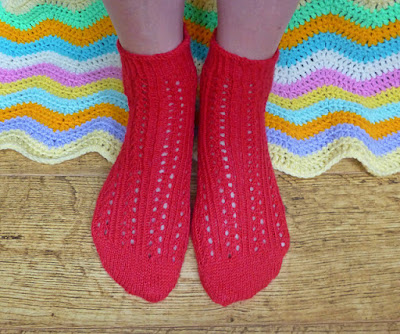 A colourful meditation mandala.  I made this up as I went along - great fun. 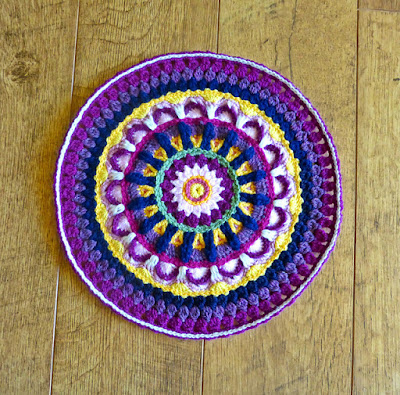 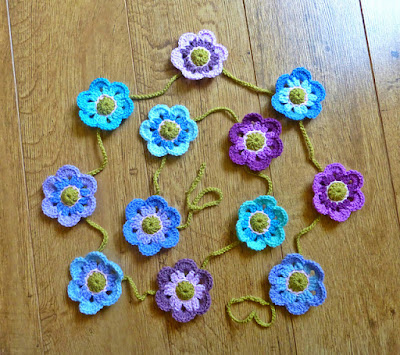 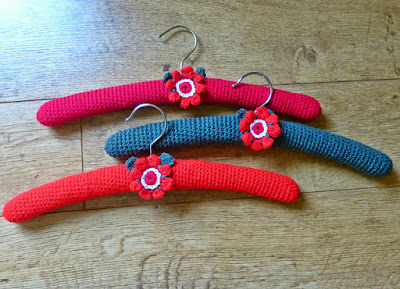 I'm currently working on a shawl.  It has an applied lacy border and I'm just over a quarter of the way along the edge. 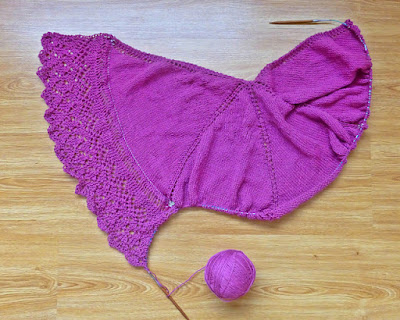 I've also recently cast on some mittens and I'm hoping to fit in a few more small items and another shawl!  I've only got until 24th July, so time is of the essence.

Last month, I finished two more pairs of socks whilst watching the European Championships (congrats to Portugal).  Usually I only knit one pair of socks from each of the 100g of sock yarn I have, but because I prefer to knit ankle socks, I find that I have about 45g leftover.  So, these two pairs of socks are knitted with the same yarn, but for the second pair, I have knitted contrast toes, heels and cuffs.  This used but virtually the whole of the 100g, so I was pleased with this.  For both these pairs of socks, I again used the Sockmatician's Toe Up recipe, which is now firmly confirmed as one of my favourite recipes. 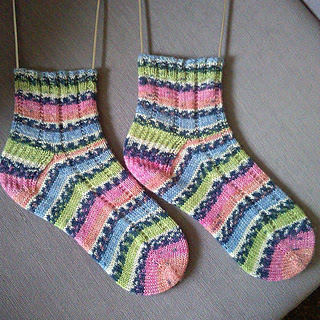 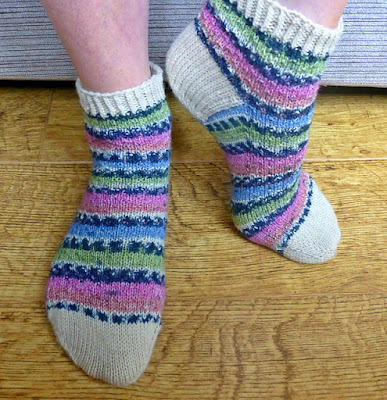 This weekend, besides the Tour de France, we will also be watching the first cricket test match between England and Pakistan, the Open Golf from Troon and there's also some darts on.  It's hard work being a sports fan!  At least I should make excellent progress with the shawl.

Until next time, happy crafting to you all.
Posted by Janet at 14:44 10 comments:

We've had a mini break, not really a holiday, just a break from home.  Grace went to Glastonbury (which she really enjoyed) and while she was away, we stayed at her flat in Sheffield to look after her hamster!

I don't know whether Juno the hamster appreciated us being there because she spent all her time trying to chew through the bars of her pen to escape! 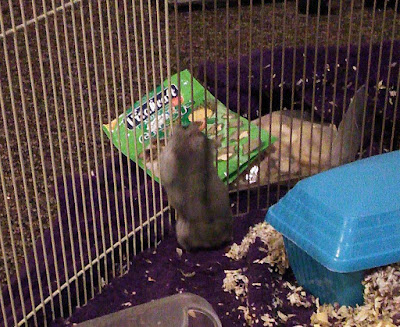 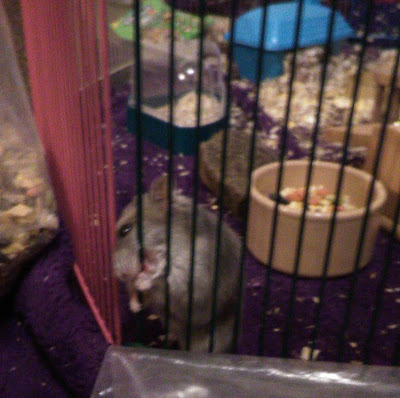 Anyway, we had a lovely time in Sheffield, very relaxing.

Now that I'm settling into dressmaking and feeling more confident, I've been watching The Great British Sewing Bee on TV.  This is the first time I've watched the series, which is now in Season 4.  I really enjoyed watching this and feel that I've learnt quite a few new things.  At the moment, my dressmaking projects can be classed as "Easy" or "Beginner" but I'm determined to branch out and tackle some more challenging projects in the future.

For the time being I'm making nice, simple summer dresses.  Here is the latest one I've made.


I have again used the Simplicity 6262 pattern, but having put sleeves in the previous version I made, I have decided I'm more of a sleeveless dress person - at least as far as summer dresses are concerned.  I added a ribbon around the waist this time.  It adds quite a nice trim, but I could have done with applying it better - next time I'll be able to do it better.

I'm hoping for some warm and sunny weather now, so that I can wear it.

Whilst we were in Sheffield I was looking at the sewing machines in John Lewis.  I thought I should maybe update my machine and I was interested in finding out more about how to do buttonholes.  When I got back home, I thought I would check the handbook for my machine to see what it could do as far as buttonholes were concerned.  I was amazed and overjoyed to find out that my machine does one step buttonholes that are precisely sized to the buttons you want to use.  I've only had this machine a mere 21 years, and who knew that it was as clever as that!  I really need to explore what else it can do, I'm clearly not using it anywhere near to its capabilities.

Tomorrow I'm planning on cutting out another summer dress, pink this time - let's hope my optimism is rewarded with some nicer weather.
Posted by Janet at 19:22 24 comments: