The trip to London has been made and it was successful.  We postponed going until Monday because of the issues with Petticoat Lane market.  We stayed Sunday night in Northampton with my sister, so only had a relatively short drive into London from there.

Grace and her boyfriend, Rob, joined us at Eve's flat, so there was plenty of help to unload the car and carry everything up the stairs.

Today is her first day in work, so fingers crossed she has an enjoyable time.

Even though we were only away from home a day and a half it feels a lot longer.  So today is going to be a planning and getting organised day.

I must admit that I always regard the first day of September as a sort of New Year.  The academic year has been a major part of the rhythm of our lives for so long. Not only in terms of the girls education, but also because my husband works in a university.  So despite the fact that my daughters are now in full time employment, the academic year is still significant.

I love new beginnings, and as my husband said, now that Eve has moved down to London, this is the start of the rest of our lives.

I have no big plans at the moment, but little plans are just as much fun.  There are lots of crafty things I want to get done as well as new things I want to try.  I don't know about you, but I find that knitting and crocheting are such easy projects to pick up and put down, that I tend to focus on them.  Other crafts like embroidery, patchwork, dressmaking etc, tend to be put on the list of things to do but are never prioritised.

So for the month of September, I have decided that this will be a "no knitting" month.  By that I mean no knitting and no crocheting in any form for the whole month.  No exceptions!  The idea is that I will have time for all the other things I want or need to do.  They will no longer be good intentions, but will finally become a reality.

So I have a new embroidery project in mind (more on that in the next post), I'd like to have a go at spinning, English paper piecing, more dress making and a whole load of other crafty things.  I'd like to enhance my juggling skills - it's great for improving your concentration levels!  I'd also like to devote some time to beautifying the garden, maybe with some drastic landscaping changes for next year.  I have been following Daffy Suburbia's summer diary and I have been so impressed with the way she organises her garden that I feel very inspired to do more than just potter around.

So today I will devote some time to thinking about what I want to achieve this month - I have high hopes but trying to keep it realistic!

I have one finished object to show you before all the baskets of knitting and crocheting projects are put out of sight for the month.  It's my Circles of the Sun cushion cover. 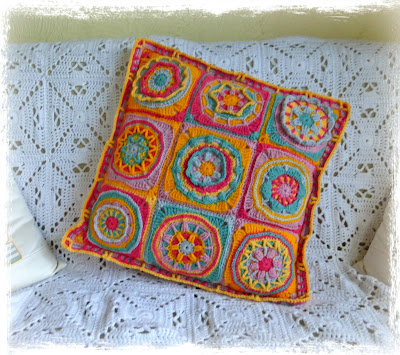 The CAL organised by Tatsiana was such fun.  Here are the nine different blocks we used. 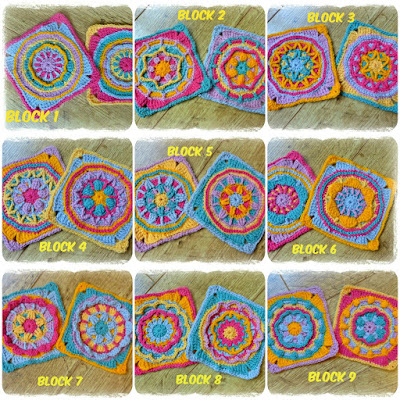 I made two of each, for the front and back, crocheted the two pieces together, then added the border as an edging. 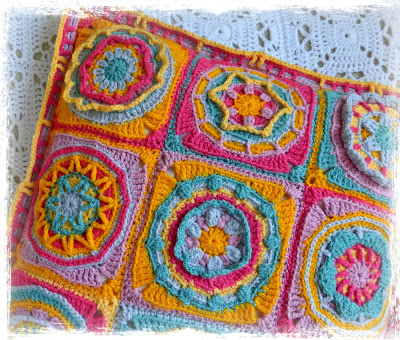 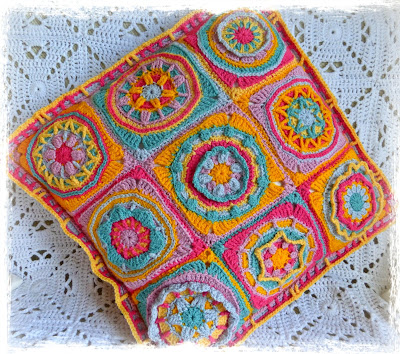 Such good fun.  You can see full details of this project on my Ravelry page, here.

The Dancing Bees shawl that I mentioned in my last blog post has been put away, whilst I think about it.  Thank you for all your comments and encouragement.  I think a month away from it will do me good and hopefully I'll return to knitting it in a more positive frame of mind.

Thank you also for all your good wishes for Eve.  I have passed them on to her and she is very appreciative.

So, I seem to have rambled on for long enough.  Now I need to get off and get organised.  Bye for now.
Posted by Janet at 11:25