We had a great afternoon out on Saturday at the theatre. We went to the Playhouse in Liverpool to see The 39 Steps. 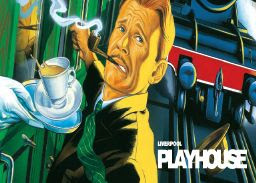 Here's the blurb about it:

This wonderfully inventive and gripping comedy thriller features four fearless actors, playing 139 roles in 100 minutes of fast-paced fun and thrilling action.
It really was superbly funny - with a cast of only 4 it was amazing the way they managed to shift between characters. We'd definitely recommend seeing this play, if you get the chance.
After the play, I even managed to pop into John Lewis and buy the wool I need for the snow queen - so it was also a very productive day out!
Posted by Janet at 09:53

Labels: Some of my favourite things, theatre