Now that Veronica is finished and the pattern published I need to sit back and take stock. It's lovely when your pattern is appreciated - I have had many really complimentary comments on Ravelry already. It certainly makes me eager to work on new designs. I own some old needlewoman magazines that belonged to my Gran, dating back to the forties and fifties. These are full of inspirational ideas - so I need to get knitting up some swatches.
In the meantime, my hands will not stay idle. I am about 60% of the way through Ravenscar and should get this finished by early next week at the latest. I think this will prove to be a very wearable, throw-on-anytime cardi.
I am also knitting a balaclava for Chris for his birthday. He won't wear it but his mum is always saying about how he wore a balaclava when he was little - we all had a laugh at the thought of him. So we decided it would be fun to give him a surprise for his birthday. The pattern is a very basic 2x2 rib so it's a bit boring. Should have it finished by the end of the week.
I haven't knitted any more of Glint since I cast on a few weeks ago. I'm probably going to frog what I've done so far and reknit the wool as the gorgeous double breasted jacket from Debbie Bliss's latest magazine. 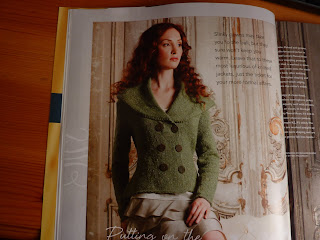 I may start this later in the week depending on how Ravenscar is going. It's nice to get things finished but even better to start new projects. I always like the option of several projects at once so I can knit or crochet depending on how I'm feeling.
My newest project is definitely a pick-me-up and put-me-down project. It's Rona from the latest Rowan magazine. A colourful crocheted jacket made from square motifs.

I've made 8 squares so far but should get quite a few more done tonight.

This means that if I get Ravenscar and the balaclava finished in the next week or so, I'll only have two projects on the go. So I've been looking at Kim Hargreaves's patterns and I think I'll have a go at Paisley - a chunky jacket - lots of texture and nice and snug for the winter.

I usually prefer to knit in DK or 4ply so this will be something different. Maybe I'll pop into the wool shop on Saturday when I'm in Liverpool.

And of course there are always amigurumi animals to be crocheted - I saw some cute hedgehogs the other day on Ravelry - I'm sure I could fit some of them in around the housework!
Posted by Janet at 15:05