I spent all summer waiting for everyone to go back to school and university, so that I could have the house to myself, and no sooner are they out of the way than they're back. Chris has reading week next week, so no teaching and Eve has half-term the following week! They could a least have co-ordinated the week.

Today was my last day on my own for two weeks, so I decided to make the most of it and have an indulgent day - knitting and relaxing - strictly no housework. So far I have watched two films - There's Something About Mary, with Cameron Diaz and Ben Stiller - absolutely hilarious, 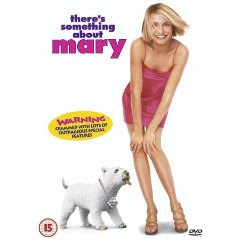 and The Golden Compass, with Daniel Craig and Nicole Kidman. 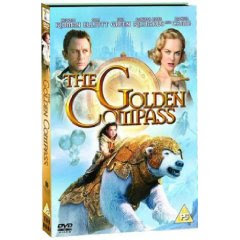 I might round off the day with Legally Blond or one of the Pirates of the Caribbean films - I never tire of watching them.
It's certainly been a productive day, knitting-wise. I have finished Chris's balaclava. He probably won't let us photograph him wearing it, so here's one of me modelling it instead. 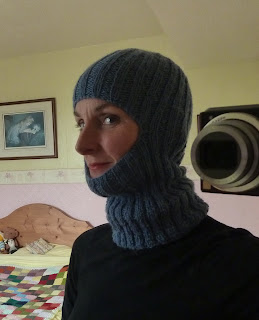 The pattern is Easy Balaclava by Nanette Blanchard and I've knitted it in some aran frogged from an old jumper. The opening for the face could do with being a bit looser but otherwise it is very warm and cozy and maybe someone might wear it when it's very, very cold - and dark!
I've also been trying something new today. Yesterday I was reading a blog by Melody Yarns and she was talking about knitting top down for the first time. Since starting this blog and joining Ravelry I have become acutely aware of all these new techniques that are out there. I don't know whether I'm ready for a top down garment yet but I did want to try three needle bind off. A few weeks ago I came across instructions for short-row shoulder shaping and three needle bind off for neater shoulders by Jessica Fenlon, so I knitted up some swatches and had a go. The instructions were lovely and clear, very easy to follow and the end result was so neat. I'm definitely going to use this on the next project I start - I wish I'd known about it earlier.
Posted by Janet at 14:17