My Olympic challenge has had a bit of a set-back - hot weather.

We are finally enjoying something resembling summer weather and my hands are too hot and sweaty to knit. I'm still managing to watch an excessive amount of Olympic coverage on the television - taekwondo, synchronised swimming (more impressive than I thought it would be), diving and mountain biking.  The knitting, however, has been slowed down.

I've also reached the point where I am feeling guilty about the garden - with all his lovely weather I should be out there doing something useful.  So today, the knitting was put down, the television switched off and I ventured out into the garden (rain is forecast for next week). 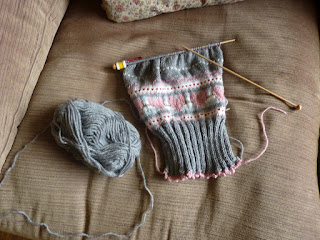 But boy is it hot - too hot to do too much gardening, I did do some - and too sweaty to knit!  I think I'll tackle the buttons on my cardigan - 16 to sew on - that'll keep me quiet for a while - and of course the television is back on!
Posted by Janet at 14:31