Grace, Eve and I went to the Playhouse in Liverpool last night and saw the play The Ladykillers.  The Playhouse celebrated its 100th birthday on Friday and this play was a fitting way to celebrate. 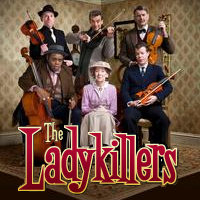 It is the stage adaptation of the classic Ealing comedy film that starred Peter Sellers and Alec Guinness.

This version starred Peter Capaldi, James Fleet, Ben Miller and Clive Rowe amongst others and it was excellent.  So funny - lots of slapstick, amazing scenery and all the acting was top quality.

We were lucky to get tickets because it was so popular, it sold out quickly.  The show moves to London, to the Gielgud Theatre on 26th November - if there are any tickets left, I'd definitely recommend it.
Posted by Janet at 13:25