When I had my rush of starting new projects around February / March (most of which have since bitten the dust) I started a wrap by Louisa Harding. I had completed two pattern repeats and then it had gone into hibernation. The other day, I was going to frog what I had knitted and use the yarn for a hat, but when I looked at it, I remembered why I had wanted to knit it in the first place. I knitted up another pattern repeat - and I liked it even more. The pattern repeats are only 6 rows and because its on large needles it grows quickly. So two days later - it's finished. 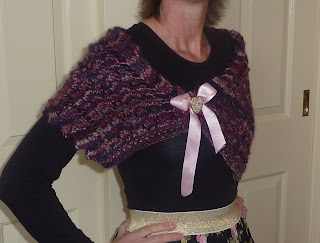 I'm so pleased with it. It's something different- it was a fun pattern to do and it didn't take long to finish. 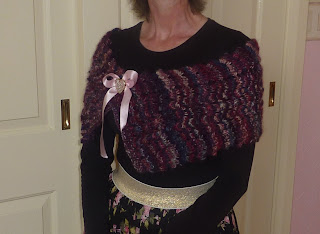 The pattern is Pikenaze, by Louisa Harding from her Little Cake booklet. The pattern can be knitted as either a wrap or a scarf depending on the weight of yarn you use. I used Twilley's Freedom Spirit, which is supposed to be a DK weight yarn but I find it knits better as an aran weight. I used less than two balls. 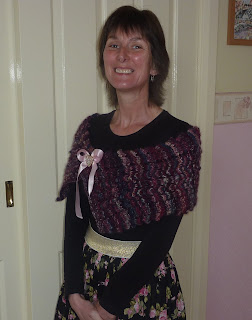 I still have two balls left of this yarn (it was originally bought to knit Ravenscar) so I can still make a hat as well!
Posted by Janet at 10:43