We didn't have Internet access over Christmas and New Year, so any posts had to be done at the library. Thankfully we're back in action and I can hopefully catch up with all the projects I completed before Christmas. Here's a quick run through of the articles.
For Grace I made some fingerless gloves. 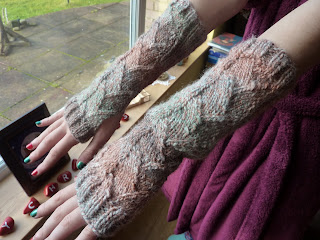 The pattern was Dragon Scale gauntlets by Anne-Marie Pearson. I made them slightly shorter than the pattern suggests - mid arm length, rather than elbow length. I used James C. Brett marble DK which gave a subtle colour change to the gloves. It was a nice pattern to follow and the gloves are lovely and warm. In the photo above we had to make sure we included Grace's interesting nail colours (red and greeen)!
For both Grace and Eve I crocheted necklaces. 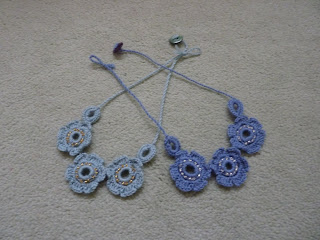 I based these necklaces on a pattern I saw in Erika Knight’s book ‘Beads and Buttons’. I used oddments of 4ply yarn and sewed the beads on afterwards. Basically the necklace consists of 3 large flower shapes and 2 smaller rings joined together with a twisted cord at each end. Very simple but looks great.
Since Christmas I have knitted a cute bear from my 'Knitted Bears' book by Claire Garland. It is based on the bear called Marigold. 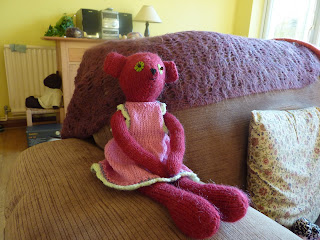 I used pink mohair 4ply yarn (the pattern called for DK weight) so the bear is slightly smaller than in the pattern. She's really cute and we've called her Rosie Bear. There are 7 other bears in the book - they all follow the same basic pattern but have an amazing choice of clothes. I may make some more as they definitely have great personalities. 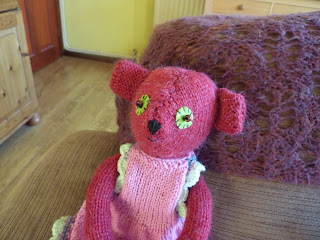 I've started some new projects - so more on them next time. I thought I would be on top of these after the Christmas rush - but I never seem to quite get there. One day I will be organised!
Posted by Janet at 11:06