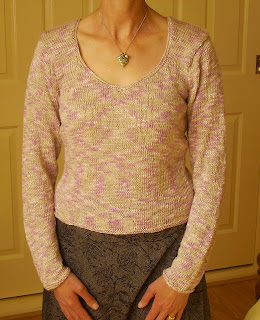 I have now finished my Damask tunic - although perhaps 'tunic' doesn't really describe the finished article. It is tighter fitting than I had envisaged (I should really do more checking of the tension) but I'm pleased with it. The yarn was originally knitted up as Tulip from Rowan magazine number 41 but I hated the style on me so frogged it. The yarn has been hanging around for a while waiting for a suitable pattern. Because of the random nature of the colouring in the yarn I didn't want to knit something too textured so in the end I decided to use an old pattern, originally for Rowan's linen drape yarn (now discontinued). I followed the basic shape from Alma by Sharon Peake in Rowan magazine number 31 and omitted the lacey panels and bobbles. The end result is a rather plain sweater but it is very wearable. I do like the texture of the yarn and the subtle random colouring. It is knitted on 3.75mm needles and took 8 balls of yarn. 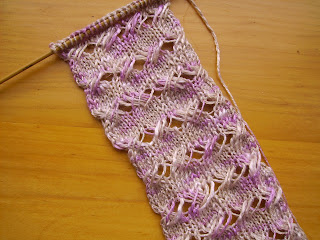 I still have 2 balls of yarn leftover so I'm making a head scarf for Eve. I'm using Dream Swatch Head Scarf pattern from ravelry by Wendy Bernard.
Posted by Janet at 14:22