What a glorious day we had yesterday - gorgeous sunshine and lovely and hot.

I soon got bored with gardening and so turned my attention to Barbie!

I'm sure I'm not alone in hoarding stuff.  We are reaching the point were we almost have as much stuff in the loft as in the rest of the house.  Obviously all the girls' toys are up there, including a large box and a large bag full of Barbie dolls, Barbie clothes and Barbie accessories.  This was put away when the girls no longer played with them.  Both my daughters are out of her teens and the Barbie collection has not been touched for a very long time.  So I decided to sort through, throw out the broken, ripped and battered and then put the rest into careful storage, maybe for some future generation to play with, but if not at some point they will reach the stage of being antique!

So I laid out some cloths on the patio and tipped it all out. 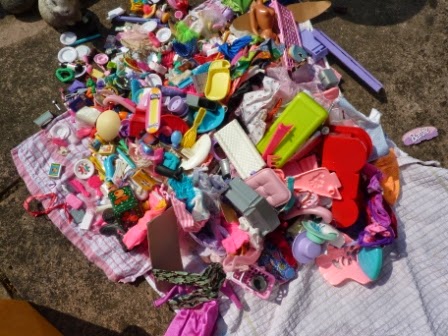 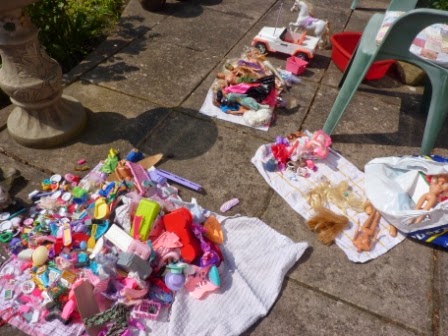 Most of the clothes were in reasonable condition, not too much needing a wash. 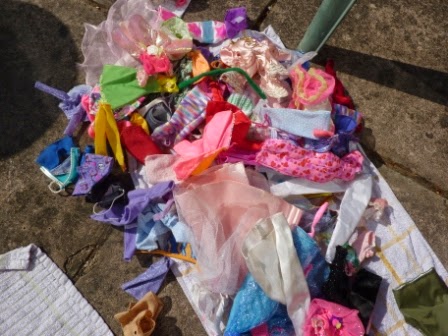 Barbie will never be short of a hair brush... 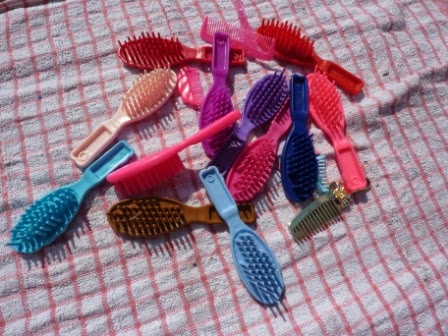 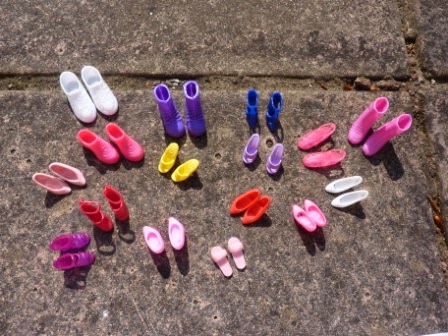 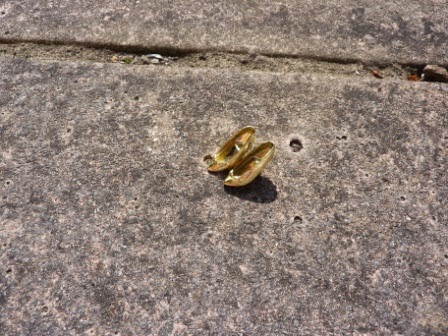 Sadly there was only one of these boots, so no retro 70s outfit for Barbie. 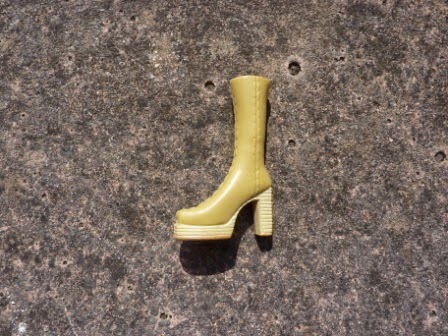 Barbie shouldn't have any problems with transport.  The jeep is looking good... 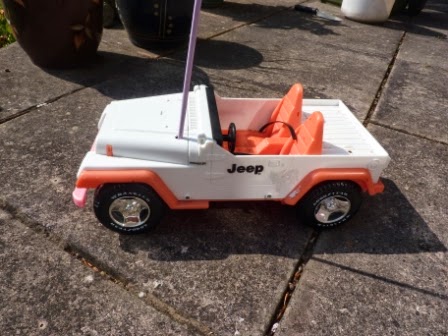 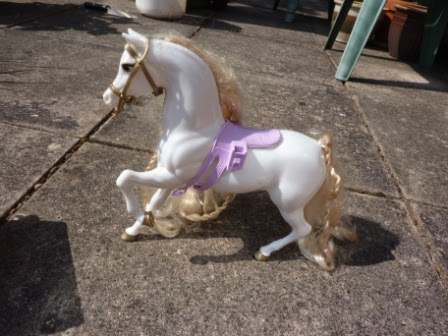 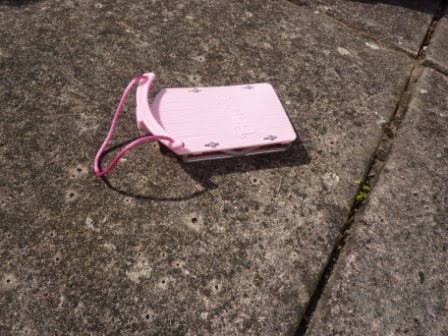 Unfortunately there doesn't seem to be much left of the bicycle! 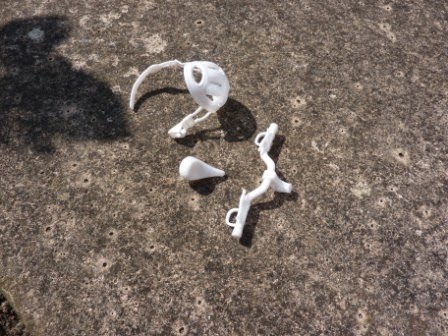 The dog is looking in need of some grooming. 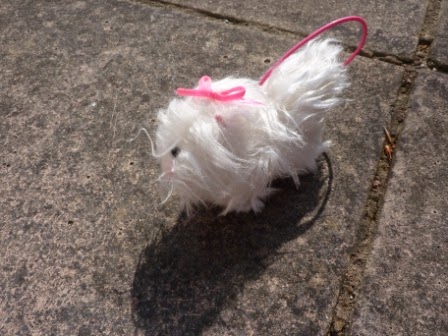 And now to the dolls themselves.  We have 'spare parts' Barbie! 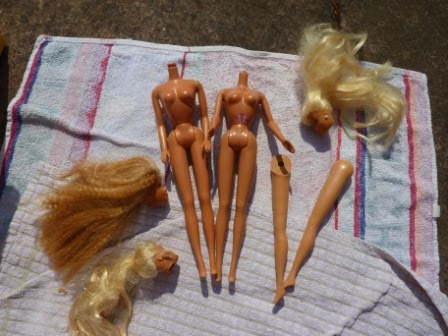 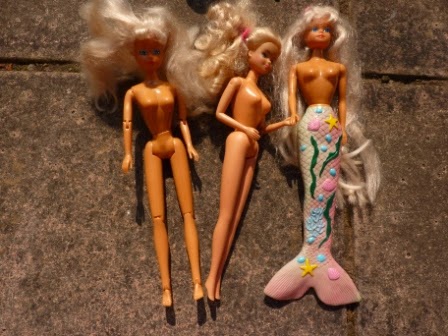 Three Ken's and two Action men.  Check out those muscles. 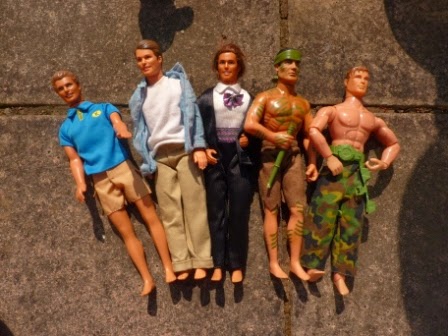 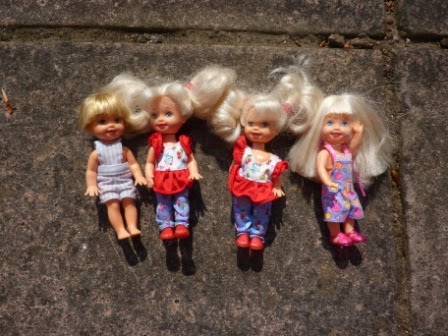 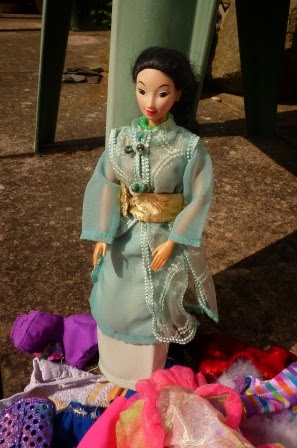 Pocahontas (more on her dress later). 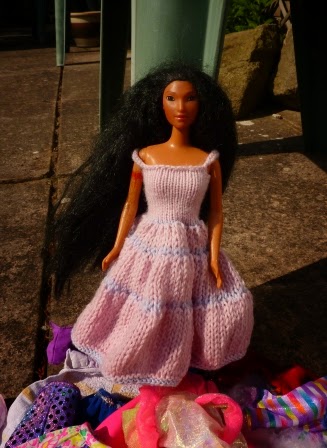 Two posh Barbies - the type whose clothes don't come off. 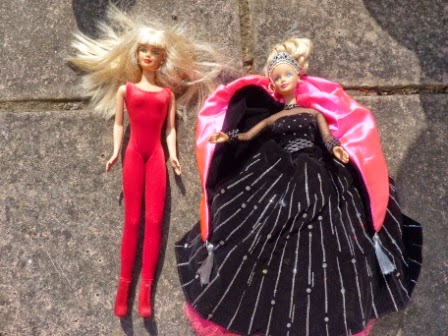 And many others whose names I have forgotten (I think one of them is Rapunzel Barbie), including a pregnant Barbie and a weird one with purple hair. 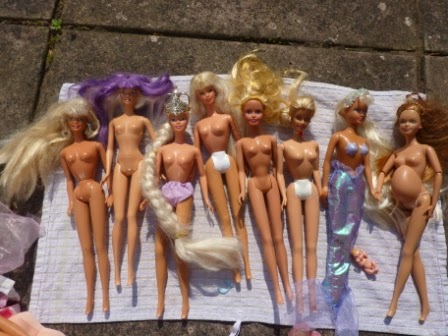 Many of them are having bad hair days - so attention needed.

I have discovered a Swedish website that has over a 1000 knitting patterns for clothes for Barbie.  It's wonderful and they are all free.  The site is called Sticka till Barbie.  The patterns are available in English, German, Swedish, Danish, Dutch, French, Italian, Norwegian, Russian and Spanish - wow!

So far I've made the dress for Pocahontas, as seen above, and this lovely little ensemble. 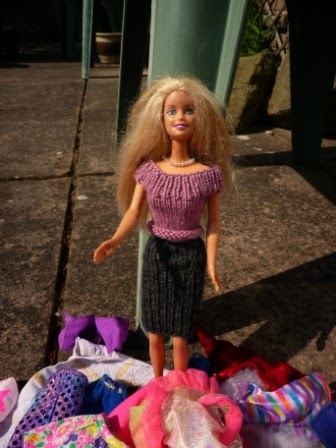 There will be more.  The Barbie dolls may not make it back into storage - I'm having far too much fun playing with them.
Posted by Janet at 13:37