...paint.  Yes, I'm decorating.  Now that Grace has moved out, Eve is moving into her bedroom and a change of colour is called for.  For Grace the room had red walls and a golden yellow ceiling.  Eve is having pale yellow walls and an off white ceiling.  It's taken about 4 to 5 coats of paint to cover the old colours but I think I might almost be there!

All this painting has meant that I haven't had a chance to indulge in some crafty time as much as I would have liked.  Nevertheless I have finally finished my seamless sweater. 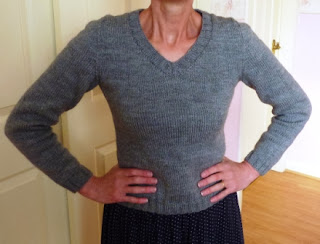 It's plain and boring and knitted up using cheap yarn but the idea behind knitting it was to experiment with knitting as seamlessly as possible.  It's knitted bottom-up and the sleeves and body are joined to complete the yoke.  The small seam under the arm is grafted for a nice neat finish.  There is also a small seam at the top of the shoulder that was closed with mattress stitch and the shoulders are completed with a three needle bind-off. 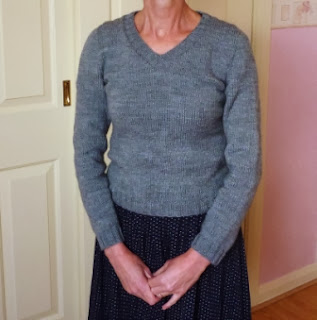 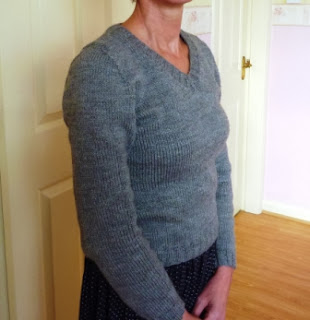 It all worked very well and there are maybe only one or two things I would tweak next time - if I ever decide to knit another seamless sweater.  The truth of the matter is, that I really do prefer to knit a seamed sweater.  I seem (no pun intended) to knit quicker, I guess this is down to shorter rows - always easier to say I'll just knit another row if you only have, say, 100 stitches on the needle rather over 300.  Also knitting seamlessly does require careful consideration and some recalculation of the pattern - just too much like hard work.

But anyway, the sweater is a lovely fit and at least I can say I tried.  Thankfully it's out of the way and I can start something new - the Scatness Tam by Kate Davies I've been promising myself for some time.

Tomorrow I'm painting the woodwork in the bedroom, but I'm sure I'll be able to fit in a few rounds of the tam.
Posted by Janet at 16:28