So, here he is! The new rabbit mascot for the World Cup. 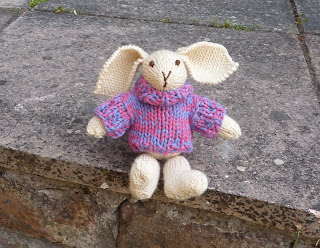 He is reasonably quick to knit and construct - being the third time I've made this rabbit, I'm well practised at it. The sweater is knitted with two strands of DK yarn held together - I chose a pink and a blue to make it more exciting.

The pattern is Small Rabbit in Sweater by Debbie Bliss from her Toy Knits book.

All the rabbit needs now is a name. He'll be named after the scorer of the first goal in the competition. The first match takes place on Friday 11th June - South Africa versus Mexico. Until then, I'm afraid he's just rabbit! He is making himself useful though - he's sitting by Eve keeping her company in her revision work.
Posted by Janet at 11:23