I was in Liverpool city centre last week.  I'd popped in to pick up some curtain fabric for the newly decorated hall and landing.  And when passing St George's Hall, I noticed there was a lot of metal fencing surrounding it and what looked like fake snow on the steps.

Later that evening my husband and I were back in the city centre to meet a friend for a drink and there was considerable activity in and around St George's Hall.  I took a photo - just in case! 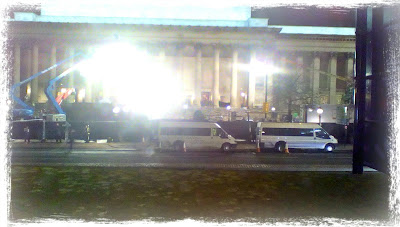 I've since found out that they are filming scenes for J. K. Rowling's Harry Potter spin-off book "Fantastic Beasts and Where to Find Them".  The film stars Eddie Redmayne but unfortunately I haven't spotted him around, although one of his co-stars, Jon Voight has apparently been seen in one of the Liverpool night clubs.

Apparently, Liverpool is the only non-studio location for the film, and the city is doubling up as 1920s New York.

The film isn't being released until November next year but I shall be looking out for Liverpool when I go to see it.
Posted by Janet at 21:12