Working My Way to Gold

How are you?  I hope that life is treating you well.  Have you been watching the Olympics?  I've tried to catch as many events as I can but it's a pretty packed programme so it's difficult to fit everything in.  There's been some very impressive performances, you've got to take your hat off to the dedication and hard work that all the participants have put in.

I thought about trying to have a themed knitting and crocheting event to coincide with the Olympics, but in the end I decided I just needed to get my works-in-progress progressing!  As it turns out, I'm actually doing a triathlon.  I have three projects I'm working on.

The first of my triathlon projects is a knitting one.  It's my Fair Isle cardigan.  I'm trying to get this off the needles because it's a summery cardigan and I'd like to be wearing it sooner rather than later. 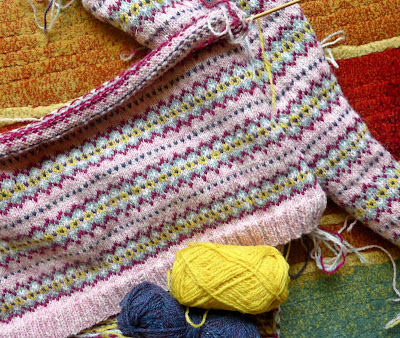 It's slow going but I've reached the armholes on the body and one of the sleeves.  I need to work out my shaping of the armholes and hopefully hit the home straight soon.  I have a horrible feeling that I'm going to run out of my main colour but I'm putting that to the back of my mind at the moment and just concentrating on getting as much progress made as possible.

My second triathlon project is a crocheting one.  My Mandala Madness blanket has been hibernating for quite some time now.  I put it to one side whilst I had a sock blitz and then there was the stash busting blitz, so it has been sadly neglected. 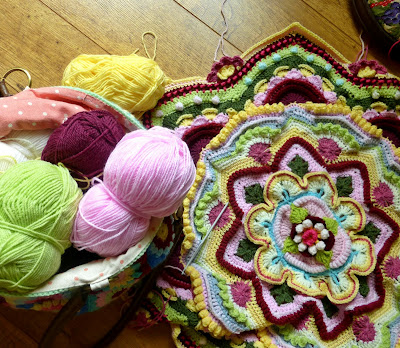 Having picked it up again, I'm loving working on it.  At the moment it's my project of choice.  Such fun picking the colours for each round and seeing how it all comes together.  There's still quite a long way to go with this project, but it's a super way to use up my acrylic yarns, so it all helps to reduce the stash.

Finally, the third triathlon project is a crochet pattern I'm hoping to publish shortly.  It's for a colourful mandala that I designed last year.  Grace kindly tested the pattern for me  but I've been very dilatory in completing the pattern. 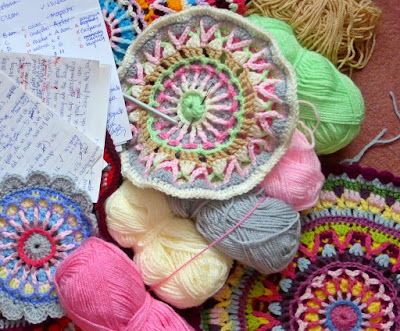 At the moment I'm working through the pattern again and taking round by round photos to support the pattern.  Every time the pattern has been worked, the variety of colours used creates a unique interpretation of the pattern.  It's such fun to play with the colours and see the effects produced.

All these projects will take some time to complete so there will be nothing off the needles for some time.  They will eventually make a significant dent in the stash, so that's good news.  I did finish my August socks last week. 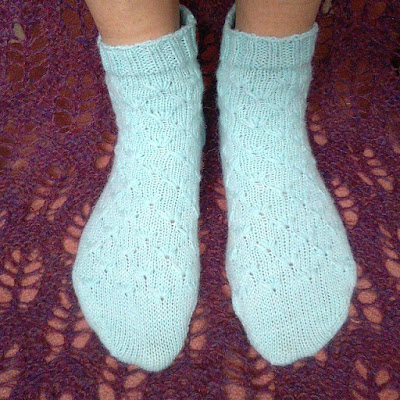 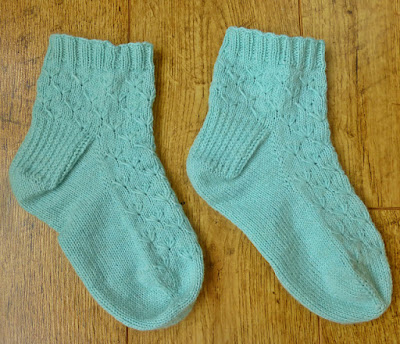 Again these are toe up socks - firmly established as my favourite way to knit socks.  The pattern is called Fine and Dandy and you can see full details of this project on my Ravelry page, here.

So, now I'm back to my triathlon projects for the duration of the Olympics.  I hope you have a good week and I'm looking forward to picking up my gold medal shortly!
Posted by Janet at 15:38