Isn't February flying by!  As usual I've set myself so many goals and targets, I'll be lucky if I get even half of them done.  I have so many knitting and crocheting projects on the go now that I need to stop creating new projects and concentrate on getting some finished.

So, obviously the first thing you do in this situation is draw up a list (I love lists).  I've split all the wips into three groups: short term, medium term and long term.  I maybe should have a fourth group called open ended but I'm not too worried about the long term projects at the moment. 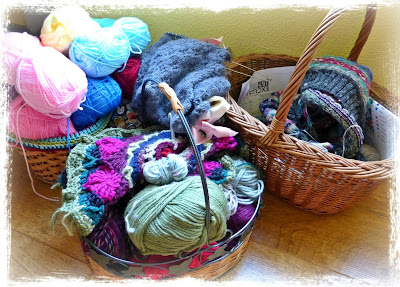 For the medium term projects, shown in the baskets and bags above and taking up a significant amount of space in the living room, I have -
Eve's Fair Isle cardigan,
Grey cardigan for me,
Hansel Hap,
Leftie shawl,
Granny Square bag,
Aran Sophie blanket.

The last one is something I started earlier this week.  It's the Sophie's Universe blanket that I made last year, but using up my leftovers of Aran weight yarn.  It'll be a modified version, as there isn't that much yarn to work with.

So I'm hoping to get maybe two of these finished during the course of the next week - although I haven't decided which two to work on yet, so I'm flitting from one to another at the moment until I decide (which probably means that I won't get any of them finished!)

In the short term category I only have one project and that's my February socks.  I've been using my new basket for this project. 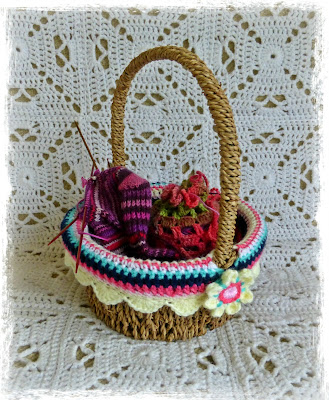 I've been asked by a number of you for instructions on how I make my basket liners, so I'll write up some notes and share them with you shortly.  But back to the socks, and at last  I have something finished to show you. 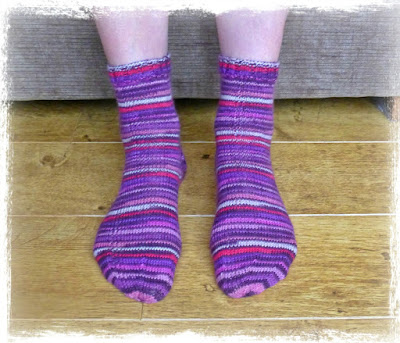 I love the colours, they remind me of the rows of lipstick testers on the cosmetics counter.

Full details of this project can be found on my Ravelry project page, here.

So now I'm going to sit down and work out which other projects I want to concentrate on and hopefully finish - before I get tempted to start something new!
Posted by Janet at 12:39