Eve's friend Michael asked her if I could knit a hat for his girlfriend, Alice, for Christmas. No problem - I've become a bit of a celebrity among Eve's friends with all my knitting and crocheting. Anyway, Michael wanted a hat with a pig face on it (apparently it's a joke between the two of them - I just hope she appreciates the joke!).
This is what I came up with. 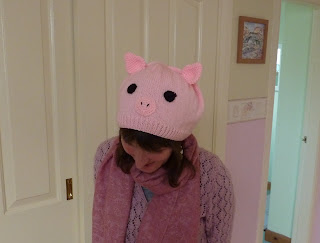 I used a basic beanie pattern called Easy Peasy Beanie by Crazza. This is available as a free Ravelry download. It's very versatile and quick to make with clear instructions. It only took me a few hours on total to make. You can see the full details of the project on my Ravelry page, here. 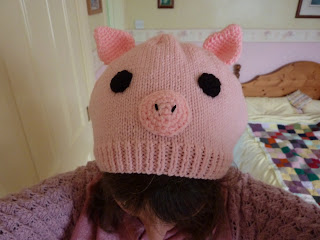 The snout, ears and eyes were all crocheted. 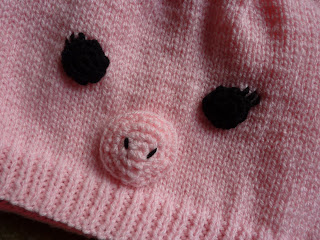 Michael is really pleased with the result, he's giving the present to Alice today. I wouldn't accept payment for it - I enjoy knitting whatever - but he felt that he wanted to give something, so a compromise was reached and he has given the money to our local charity -The Waterloo Partnership, which helps the residents of Waterloo in Sierra Leone. So we all feel good about it.
Eve wanted me to make a hammer for her friend Fin. They have an ongoing joke about 'hitting the nail on the head' - something their English teacher says a lot - I think they have a specific head in mind! 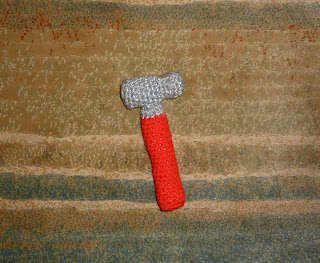 The pattern is another free one, Magic Hammer by Karen Null and is available here.
I've still got lots of knitting and crocheting to do for Christmas - over-ambitious as usual. School finishes today, so I will no longer have the house to myself - I shall have to find somewhere to hide away and knit in secret.
The Darts World Championship starts on the television tonight - so I may treat myself and start a new sweater!
Just got my result from my Open University Earth Sciences course (Distinction!) - way better than I had expected because the exam was a real stinker. I've had a cry and a laugh about it - good job I'm on my own - no one to see me - I hadn't realised I was so worried about the result. I've just eaten a bag of chocolates to celebrate and now I had better get back to the knitting and making.
Posted by Janet at 11:17