I've taken a break today from cardi knitting to try something new.

Grace bought me some lovely grey wool for my birthday - 2 balls of Sirdar Escape DK.  Grey is such a versatile colour, I love it. 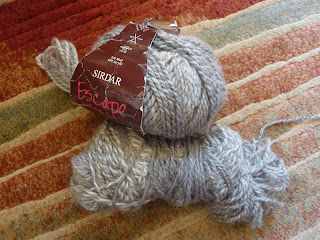 So I did a search on Ravelry for something to knit with it.  Isn't Ravelry wonderful? - you can type in the weight of yarn, the yardage available and select free patterns and you are given an amazing choice of patterns - I love it.  Anyway, I found an interesting pattern for a hat (the sun's come out since I decided to knit a hat!).  I'll give the details of the pattern I found when the hat is finished.

Now, I am not a big fan of knitting in the round on dpns.  They have their uses but I'm happy to seam rather than struggle with four or five needles all tripping each other up.  I usually convert hat patterns from in the round to flat knitting, but it's not always possible.  So I was overjoyed to find a tutorial showing you how to use two circular needles instead. 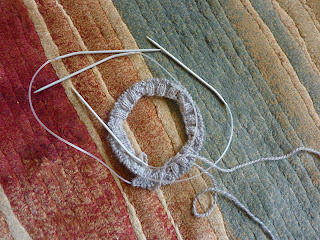 Yes it looks a bit tangled but it's so much easier than dpns, just a case of sliding the stitches along the needles - I'm converted.  I shall be knitting in the round so much more now - bring on the hat patterns.

The technique uses two needles so obviously you have to own two of the sizes needed.  Fate was on my side as I had two 3.25 mm and two 4.5 mm circular needles (why I had 4.5 mm circular needles I don't understand I can't remember ever using them - but now they are perfect!)  I shall have to order some more circulars in other sizes so that I'm ready for anything.

The other great thing about this is that because the circular needles are flexible you can try the hat on after only a few rounds.  This proved to be very useful as I found out I had cast on far too tightly - so I ripped it out and started again without having got too far into the pattern, wonderful.

So if you haven't discovered this excellent technique already you can use the tutorial here.  Now back to the hat - Happy circular knitting.
Posted by Janet at 14:24